Everything's Amazing, Nobody is Happy

My hubby showed me this clip. Not only is it completely hysterical, its 100% true. I'm sad to admit I have had this attitude, more than once.

Maybe I should be a bit more grateful.

If you know me, you probably know my sisters.

If you know my sisters, you know how utterly charming they can be...particularly Katie.

Katie being Katie took it upon herself to name our little fetus, Spud. Which, in my defense {Ginger} is worse than Helga Belle.

Katie even took it upon herself to fashion a picture of what spud would look like based on my and B's looks.

This is what she came up with. 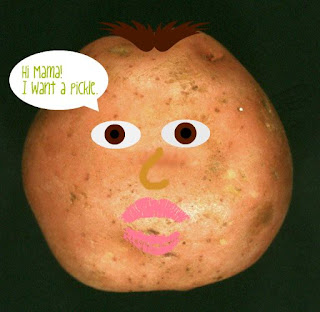 *This is quite long, its more for my own personal venting than anything else...feel free to ignore.


Being pregnant, I am experiencing a certain kind of negativity that I also experienced right before I got married. It bothered me then, and it bothers me now. The negativity has nothing to do with me or my attitude. It's more what other people have to say to me, knowing my circumstances or not, saying things in general or otherwise, and I'm irritated to the point that I need to vent.

Shortly after Brandon and I got engaged, I began hearing the most awful stories about marriage, how you lose your identity, your freedom, and how all you do is fight. All this came to me completely unsolicited, mostly from people who didn't know me or know that I was getting married. For the most part, people who knew me weren't saying anything at all. Most married couples I know, are happy and have good relationships. But I still never heard anything good. Ever.

But on occasion, the negativity would come from someone I cared a lot about. One of them even once told me, "If I had known then what I know now about marriage, I never would have done it." It scared me to hear things like that. I was terrified. Over and over again, people would tell me how hard marriage is, "It's soooo hard. Marriage is SO HARD." I began feeling completely inadequate, that marriage wasn't something I was qualified to do.

But then my dear sweet friend, Candis, told me, "Julie, you have been done things way harder than marriage. Marriage will be a piece of cake compared to what you have been through." This coming from a girl who has been married for quite a while, with a small child, whose husband had served multiple times during this war. If she can do ALL of that, I can certainly handle this, Brandon's not even in the military. She was about the only person who put my mind to rest.

And she was right.

For a few months now, I have been talking to my friend, Ginger, telling her that I am experiencing the same thing, and how utterly frustrating it has been. Now that we are expecting our first child, it seems like I'm getting all that negativity all over again. "Having a baby will ruin your marriage," "Don't ever have kids," "Once you have kids, they are always there...take your time." Ugh. The list goes on and on.

I don't want to discredit any parent out there. I know that being a parent is the most difficult thing, that it is heartbreakingly hard, and that you do sacrifice so much of yourself once you have a baby. I get that, and I respect that. I wouldn't ever take that away from them. I'm fully anticipating my life to change completely. I just feel so sad when people have nothing positive to say about having children. It can be so disheartening. Especially, since getting pregnant was something we were told may or may not be likely to happen. That fact changes your attitude so quickly.

I will say that at least this time around, there has been a small group of new mothers tell me the complete opposite. They have been women, I know, some I don't, some full length conversations, others have been comments on Facebook, or quick little emails, but just knowing that there are mothers out there whose lives and marriages didn't fall apart when they had children has been comforting. And I am so grateful to them.

I have such a difficult time when people are so negative about FAMILY, when people mock marriage. My biggest pet peeve is when someone will comment on me and Brandon being affectionate or something, saying things like, "Aw, that's cute, it won't last," or "Enjoy it now. They're only like that in your first marriage."

From the time I was 16, I didn't have a whole lot of family stability. The circumstances were beyond any one's control, but unstable still. To joke about divorce is not ok. At all. I know a lot of people from a lot of walks of life, married, single, very religious, not religious at all, rich and poor... who joke about it or make comments like this to married couples and it irritates me to no end. I've been witness and victim to more than my fair share of divorce. To joke about a relationship that means eternity to me is disrespectful. I decided a long time ago, that I am only getting married once, and I believe that.

Yes, marriage can be hard, messy, and complicated. Every marriage is. But its not hard in the ways I thought it would be, and somehow we've figured out how to make ours work and work well. People are lying if they say that being married and having a family is bliss 24/7. I'm not naive enough to think that. Are we perfect? No. Do we have our bad days? Absolutely. Does the good outweigh the bad? Always. Are we committed to making things work? No question. We grow from the complicated. We learn from the messy.

I remember a sister missionary telling me, "Satan will try to destroy the family, even before two people BECOME a family." This struck me as so true, and I have remembered it every day since. I have to remember what I am here for, what Brandon and I are here to do together. I need to remember to have faith in all this, to trust that the Lord knows what he is doing with my life, and to wash my hands of all the negativity I hear daily about the good choices we are making as a family.

A bun in the oven!

That's right. These Decorations are having a little one! He/She is due to be here September 8th, which makes me just shy of 12 weeks right now.

We are so excited/nervous in all the best ways! (My mom is just ECSTATIC!) And we can't wait to see where this new adventure takes us.

1. Cereal. I love cereal. I could eat it three meals a day.
2. Every morning, Mary (who I work with, and is the most enearing lady I've ever met) comes in when its time to go get the students and says, "Let's go get the little darlin's." I strikes me as so sweet especially when most of our inmates are anything but darling.
3. My husband's job. I'm so grateful that he is a part of a company that is making a difference for the better, that it provides stability, and the opportunities it allows us.
4. A clean desk.
5. All the wonderful kiddos that have been a part of my life. Megan, Cortney, Austin Casch, Edie, Colin, Claire...I miss them all the time.
6. B's ability to make me laugh, smile, and be happy over just about anything.
7. I have rediscovered my love of the pool at the gym.
8. The mild winter of GJ.
9. Naps.
10. Anticipation.