My Granny K always says, "You aren't really loved unless you have a nickname." I have about a hundred, which must mean I'm loved. A lot. I was tickled and amused as Brandon and I were dating, to learn that had about twice as many nick-names as I did. I took this as a good sign.

I have since added several of my own nicknames to his ever growing list and he has added to mine, which I won't share as to keep the gag inducing cutesy stuff at bay. But these two are my favorites:

Bubbs/Bubba: Bubbs to his siblings, Bubba to the nieces and nephews. My first interaction with my future nieces and nephews was on my first trip to Washington. He wanted to introduce me to his siblings and we went to his sister Taunya's house. Within seconds of her cracking open the door, her kiddos came barreling down the stairs screaming, "Uncle Bubba's here! Uncle Bubba's here!" He then proceeded to plop down on the ground where they crawled all over him, wrestled him, and exhausted themselves to the point of breathlessness. A repeat performance of this at his brother Dustin and SIL Andrea's house had me completely hooked and my heart strings all a titter. 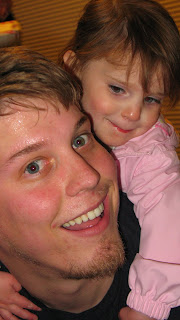 Brother Husband: I have sisters. Really good ones. And, well, we are sort of a package deal. We are protective of one another, that's never changed. Just ask Mr. Erickson, Haley's old math teacher who got a colorful earful from Katie when he made Haley cry. It's just the way we are. I was understandably nervous to introduce them to Brandon, because if they didn't like him, well....sucks to be him. Thank goodness they adore him. I mean, really, how could they not? He has become the big brother they never had, and he loves them they way a big brother would. The name Brother Husband suits him and it makes this sister so very happy. 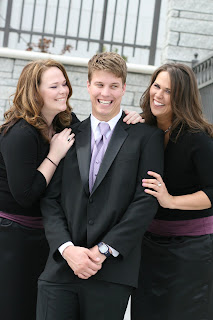 Oh how I love my multi-named husband.

Need to laugh hysterically? Squirm uncomfortably? Vomit in your mouth? Click here. It's hilariously uncomfortable. Hours and hours of amusement and weirdness for your gawking delight.

The Ugly Side of the Bump

I'm a female. And so are you...at least, I'm pretty sure I have no consistent male readers (except for maybe Steve, but he can totally handle awkwardness of the female variety, but I digress). So I can talk about this garbage, and you can sympathize even if you haven't walked this road. Cause we are females, we do that for each other.

What the crap, Pregnancy?

Maybe, I'm just hormonal today, maybe the Prego Fairy just smacked me a bit hard with her "fat" stick, I don't know...either way, I have a bone to pick with her.

I think, like many women, I was a bit disillusioned by the thoughts of pregnancy before I was actually pregnant. Don't misunderstand, I am eternally grateful for this whole experience (especially since we had been told this was unlikely to happen, at all) and I am more than willing to make sacrifices for my family. Totally. I think I was just misinformed. No one really talks about the ugly side of the bump.

I have no clue how many blogs I have read (and written, for that matter) about the magical awesomeness that is pregnancy. To be fair, it has its amazing, tender moments. To be more fair, it has twice as many cruel ones, that really, you have to laugh at. Otherwise, you cry. Lately, I tend to do both.

For example.....
A few weeks ago, while visiting the hubby in Wyoming, we made a day trip to Jackson Hole for a little "us" time. While there, I experienced my most embarrassing moment during my pregnancy, possibly during my life. We meandered into a museum and leisurely strolling through the various exhibits. I should probably mention I was suffering through some fairly severe allergies and was having massive difficulty controlling my endless sneezing...Anyway, while B was describing this thing or that (I can't remember which) I felt what can only be described as an "uber-sneeze" begin to work its way through my sinuses and to my nose. I should probably also mention that I had also lost control over other bodily functions a few weeks prior, and was rarely given warning as to when one of those attacks might rear its ugly head. (Oh, yes...THOSE.) So, unable to control my body at all, I emitted explosion sounds...from both ends of my body. Yep. I let one rip in public. B was nothing if not horrified and completely stunned. He just stared at me, mouth hanging open, unable to speak for about 20 seconds before he just backed out of the room. All the while, I could do nothing but laugh hysterically.
Then there are nights like last night. For those who know me well, my weight "ballooned" there for a few years and then I lost it. I worked dang hard to lose it. About 2 months ago, as the numbers on the scale were creeping up rapidly despite my best efforts of keep them down, I became totally and completely discouraged and vowed to avoid the scale from then on, even turning around at the doctor's office so I didn't have to know the number. Somehow its ok for my doctor to know the number, but just not me. Can't even go there. But last night, curiosity killed the cat and I dragged the scale out from behind the toilet and gingerly stepped on it....only to look down at the number and have it reduce me to tears... a sniveling, weeping, sobbing mess. Just reliving it in my head makes me well up all over again.

I have a temper like you wouldn't believe, and it strikes for no apparent reason. I have never been less physically appealing in my life and it discourages me to no end, and its only going to get worse. I fear I will never gain control over my bodily functions again and my husband will wonder what kind of girl he married. I swear I'm still feminine...somewhere on the inside. I think.

There is soo two sides of the bump. The loveliness, the tender moments, belly kisses, kicking, belly pictures, anticipation, the side I think my heart resides on more often than not...love it...the other side, the ugly side, not so much. I'm definitly living on the ugly side of the bump today.